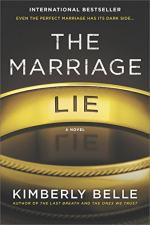 Get The Marriage Lie from Amazon.com

Everything you need to understand or teach The Marriage Lie by Kimberly Belle.

In The Marriage Lie by Kimberly Belle, Will Griffith is supposedly killed in a plane crash. As the truth about Will's "death" in the crash unfolds, Iris (his wife) learns he was not the man she had thought she married. Will’s story about growing up in Memphis had been a lie, and it appears that Will had stolen money from a former employer. Iris is forced to deal with these uncovered facts about her husband before deciding the fate of their marriage. Themes in the novel include the impact of social class on a young child's nature, the effect of a person’ actions on others, and the factors that determine Iris’ decision.