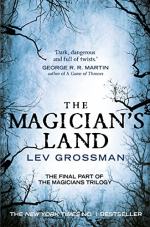 Get The Magician's Land from Amazon.com

Everything you need to understand or teach The Magician's Land by Lev Grossman.

“The Magician’s Land” is a young adult fantasy novel by Lev Grossman, is the third part of his “Magicians” trilogy, and which follows the continuing adventures of Quentin Coldwater after his dethroning and banishment from the magical land of Fillory, and his efforts to nevertheless save Fillory once more. Having been exiled from Fillory, Quentin, now nearing the age of 30, struggles back in the real world. He ultimately decides to...