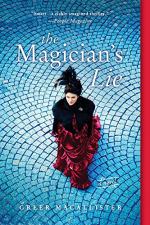 Get The Magician's Lie from Amazon.com

Everything you need to understand or teach The Magician's Lie by Greer Macallister.

The Magician’s Lie is an historical novel set in the late nineteenth and early twentieth centuries, telling the story of Arden the Amazing, the first female magician to ever saw a man in half during her stage act. The story alternates between one night in 1905 when Arden was arrested for murder by an injured policeman called Virgil Holt, and Arden recounting the story of her life from her childhood until the night of murder that brought her and Virgil together.