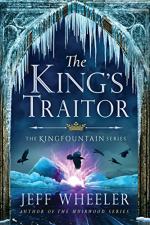 Get The King's Traitor from Amazon.com

Everything you need to understand or teach The King's Traitor by Jeff Wheeler.

The King's Traitor, by Jeff Wheeler, is the third novel of the Kingfountain series. Owen Kiskaddon is now a young man who is struggling under the responsibilities of his role in Ceredigion. The country's ruler, Severn Argentine, has become a cruel, ruthless man without any trace of compassion or kindness. As Owen continues to unlock the mysteries of the Fountain and understands that the terrible war being waged for the throne could literally destroy the entire country, he becomes the duke who leads the charge to topple Severn from his throne. Owen then faces a decision of the heart when he realizes that he returns the love of a woman who cared for him even before Owen was worthy of her love. The novel's main themes are the prophecy of the Dreadful Deadman, loyalty, and the true identities of the multi-layered characters.