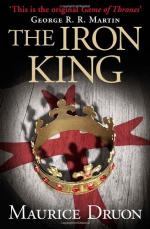 Get The Iron King from Amazon.com

Everything you need to understand or teach The Iron King by Maurice Druon.

The novel of "The Iron King" by Maurice Druon is the first in a cycle of seven books "The Accursed Kings" which chronicle the formation of the Nation state of France from the early Fourteenth Century onwards.

The tale of the "Iron King" concerns itself with the reign of King Philip IV (or Philip the Fair, known for his outstanding handsomeness). Philip the Fair was an autocratic ruler, a widower and...