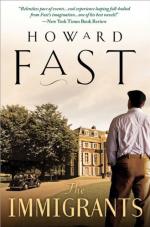 Get The Immigrants from Amazon.com

Everything you need to understand or teach The Immigrants by Howard Fast.

Fast's concern in this first volume of a five-volume family saga set in California is the development of American industrial capitalism from the turn of the century until the Depression and its effect on those who participate in it.

Always, he explores the interface between the promise of democratic liberalism and the classism, racism, and sexism which blight both personal and public life. Against the background of two world wars, Vietnam, and finally American involvement in El Salvador, the economic boom of the early part of this century, the Depression, McCarthyism, and the development of American interests which involve policing most of the globe, Fast creates characters who interact with and contribute to these events.

In this reworking of the Horatio Alger myth, Fast shows not only the opportunity offered by the immigrants' new environment, but also the toll taken by the need to...

The The Immigrants Study Pack contains:

Howard Fast
3,923 words, approx. 14 pages
Howard Fast tirelessly worked his way from poverty to become one of the most widely read writers of the twentieth century. He was already an acclaimed writer by the mid-1940s, when he decided to forma... Read more