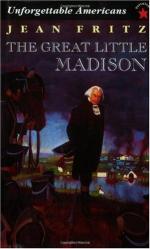 Get The Great Little Madison from Amazon.com

Everything you need to understand or teach The Great Little Madison by Jean Fritz.

"However history may judge Madison on his political performance, no one can say that he did not stand up for freedom of the press and freedom of religion whenever he had the chance," declares Fritz. According to Fritz, "Nothing made James angrier than to see men punished for their religious views," so he argued for religious tolerance all his life. The Great Little Madison is an account of the life of a man who devoted himself to the public welfare and who lived the ideals he preached. When he was slandered in the press or by political opponents, he refused to use his powers as president to suppress his enemies; when called upon to declare a national day of prayer, he wrote his proclamation so that all faiths were included. This biography is about how Madison helped to shape the United States with hard work and a determination...