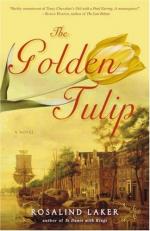 Get The Golden Tulip from Amazon.com

Everything you need to understand or teach The Golden Tulip by Rosalind Laker.

The Netherlands was the first country in Europe to move from the feudal system that had oppressed the working class for centuries into a more open, democratic, and capitalist society. While women were expected to obey the male members of the household, they were often given a choice rather than an order. Women could also become apprentices if they showed talent in a particular field and were given permission by the male head of the household. In the rest of Europe, women were considered as property, were not educated unless they were members of the nobility, and were under the strict rule of the male members of the family. The difficulties brought to the Visser family by an irresponsible father are overcome by the strength of character of the female members of the family.

In keeping with the spirit of the times, Laker has given a great deal...