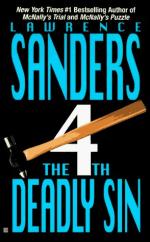 Get The Fourth Deadly Sin from Amazon.com

Everything you need to understand or teach The Fourth Deadly Sin by Lawrence Sanders.

It is the last one that gets the plot moving. Deputy Commissioner Ivar Thorsen is, as always, embroiled in political intrigues in the New York police department. He has been shepherding his proteges up the departmental ladder to positions of authority, and one of his favorites, Acting Chief of Detectives Michael Ramon Suarez, who is a good administrator...