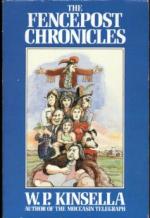 Get The Fencepost Chronicles from Amazon.com

Everything you need to understand or teach The Fencepost Chronicles by W. P. Kinsella.

As in Dance Me Outside (1977), Scars (1978), Born Indian (1981), and The Moccasin Telegraph (1983), The Fencepost Chronicles deals with the plight of nati ve Americans. Kinsella focuses especially on the Crees living in Canada, who are often in conflict with the white world, represented by bigoted Canadian police, pompous bureaucrats, unscrupulous businessmen, and selfrighteous religious sects. Not all conflicts are with whites; Chief Tom Croweye and his girlfriend Samantha Yellowknees wish...