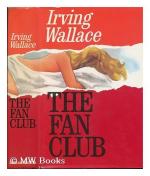 Get The Fan Club from Amazon.com

Everything you need to understand or teach The Fan Club by Irving Wallace.

As sensational as the plot is, Wallace explores several serious dimensions of sexuality. The four captors are presented as a cross-section of American males whose sexual psychology is the product of the influence of popular media such as men's magazines and movies. An epigraph from Samuel Johnson signals this theme: "Were it not for imagination, sir, a man would be...