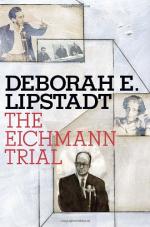 Get The Eichmann Trial from Amazon.com

Everything you need to understand or teach The Eichmann Trial by Deborah Lipstadt.

Years after the Holocaust, the search for war criminals had all but come to an end. A Jew living in Argentina came into information about a high-ranking Nazi official who was living nearby. He contacted Israeli officials and the wheels of justice slowly began to turn. Months passed before the man was identified as Adolf Eichmann who had been responsible for sending thousands of Jews to their deaths. Israelis then faced...