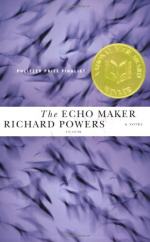 Get The Echo Maker from Amazon.com

Everything you need to understand or teach The Echo Maker by Richard Powers.

In the wee hours of February 20, 2002, a 27-year-old man named Mark Schluter has a near fatal crash in his truck on a desolate stretch of highway near Kearney, Nebraska. Mark is taken to Good Samaritan Hospital and his older sister and only remaining relative, Karin Schluter, leaves her job to be with him during his recovery. When Mark comes to from a temporarily induced coma due to brain injury, he thinks...