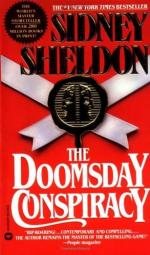 Get The Doomsday Conspiracy from Amazon.com

Everything you need to understand or teach The Doomsday Conspiracy by Sidney Sheldon.

A romance and marriage that is almost idyllic ends in divorce. A young naval intelligence officer experiences the anguish of being separated from a woman he continues to love. She had found living with a person who is frequently absent and who constantly faces danger more than she could endure. This is a common theme in police dramas, military stories, spy tales, and it reflects real-life stresses on marriages.

Extraterrestrial beings of superior intelligence who become alarmed by what blundering humans are doing to their planet is also a frequent feature of science fiction. The aliens are sentient plants who communicate through mental telepathy. Sheldon takes up the cause of environmental protection in this book. Certain industrialists are afraid that these beings will stop their exploitation of the earth's resources and form a secret society to prevent this. In Chapter Ten, the topic of plant intelligence is discussed...