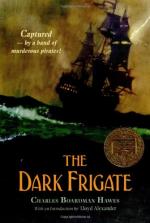 Get The Dark Frigate from Amazon.com

Everything you need to understand or teach The Dark Frigate by Charles Boardman Hawes.

A tale of adventure set at sea, The Dark Frigate chronicles the moral dilemma of Philip Marsham, a young lad forced into the service of pirates. Hawes portrays the pirates who capture Philip's ship, the Rose of Devon, as predominantly evil men. In his quest for literary realism, Hawes overturns some almost sacred conventions of the romantic adventure story: Philip does not marry the tavern maid to whom he had been betrothed; he is never reunited with his grandparents; and the fortune that he inherits is squandered in support of Charles I of England, the displaced monarch who is later beheaded. A young man drawn to yet ultimately disillusioned by the romantic urge to go to sea, Philip is left to find his place in a world of political turmoil and nebulous moral structure.