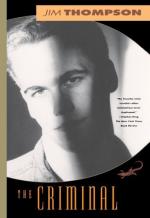 Get The Criminal from Amazon.com

Everything you need to understand or teach The Criminal by James Thompson.

In The Criminal, Thompson addresses issues of stereotyping, racism, antiSemitism, social conventions, courage and, most of all, the position of journalism in shaping the social consciousness. He does this by offering action allowing a look into the psyches of each of his characters. While the novel ostensibly focuses upon a murder case, this exists only as Thompson's excuse to place the public consciousness beneath a microscope. The book's newspaper reporter, Bill Willis, depends upon the public penchant for stereotyping to pull in a guilty verdict on Bobby Talbert before any evidence is even presented in a courtroom. Because Bobby is known as a slackard and a school truant, Willis is able to whip these common traits into a predisposition for murder after applying the right questions to receive the preconceived answers he desires from those who know Bobby. The novel pursues the idea of appearance being more important...

The The Criminal Study Pack contains: