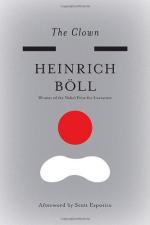 Get The Clown from Amazon.com

Everything you need to understand or teach The Clown by Heinrich Böll.

Representative of Boll's literary oeuvre, The Clown incorporates many of the prominent thematic elements considered by Boll to be of fundamental significance in his work: the alienation of the individual by a dehumanizing, materialistic, and often emasculating society; the corruption of Christian ethic and spirituality; the loss of traditional familial and social unity; and the failure of mankind to accept the moral responsibilities of the age. In the novel, Hans Schnier, the son of a wealthy industrialist father and socially-dominated mother, emerges as the unique and endangered protagonist, artistic, temperamental, at times irrational, yet inherently kind and decent.

Refusing as a young man to conform to middle-class standards, Hans chose instead to become a clown, surely a personal statement directed toward his family as well as a means to express in his performances the absurdities of existence. Successful in his profession, Hans falls in love with Marie Derkum...

The The Clown Study Pack contains:

Heinrich Böll
7,721 words, approx. 26 pages
Biography EssayWhen in the summer of 1972 Heinrich Boll received the news that he had been awarded the Nobel Prize in literature, he responded with the surprised question: "Was, ich, und nicht Gunter ... Read more

Heinrich (Theodor) Boell
7,395 words, approx. 25 pages
When in the summer of 1972 Heinrich Böll received the news that he had been awarded the Nobel Prize in literature, he responded with the surprised question: "Was, ich, und nicht Günter Grass... Read more