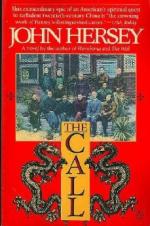 Get The Call from Amazon.com

Everything you need to understand or teach The Call by John Hersey.

The title of this novel, The Call, indicates one of its themes. Many young Americans like David Treadup were convinced that God was directing them to go to China. Once in the place where God had sent them, many must have wondered why their work was so unrewarding. Treadup, late in his life, interred by the Japanese and separated from his vocation decided that he had not really been serving God. He was not even certain any longer that God existed.

Treadup became an educator, and like Hersey himself, this became a lifelong concern. Hersey attended private schools, but became convinced that unless that great reservoir of intelligence in the American population was somehow tapped, the progress of the country would suffer. Everywhere the needs of bright students were slighted. In 1959 Hersey wrote a twenty-eight-page pamphlet for the Woodrow Wilson Foundation, Intelligence, Choice, and Consent, in which he...

The The Call Study Pack contains:

John Hersey
7,550 words, approx. 26 pages
Biography EssayIn 1950 John Hersey was considered one of the most promising young writers in the nation. His first novel, A Bell for Adano (1944), had won a Pulitzer Prize in 1945, while his journalis... Read more

John Hersey
7,032 words, approx. 24 pages
"I feel, often, as if I am making my life sketches not with a fine pen or a sharp pencil but with a thickish piece of charcoal," journalist and novelist John Hersey wrote in the introduction to Life S... Read more

John (Richard) Hersey
6,137 words, approx. 21 pages
In 1950, John Hersey was considered one of the nation's most promising young writers. His first novel, A Bell for Adano (1944), had won a Pulitzer Prize in 1945, while his journalistic masterpiece of... Read more

John (Richard) Hersey
7,343 words, approx. 25 pages
John Hersey, the author of more than a dozen novels as well as many sketches, commentaries, articles, and essays, has a well-earned reputation as one of America's most important novelists of the post-... Read more

John (Richard) Hersey
10,260 words, approx. 35 pages
John Hersey earned early recognition, first as a reporter and then as a novelist. His dispatches from Guadalcanal and Sicily for the Henry Luce magazines Time and Life made him one of the best-known c... Read more

John (Richard) Hersey
2,447 words, approx. 9 pages
In 1950 John Hersey's second novel, The Wall, established him as a fiction writer of some importance. Though his first novel, A Bell for Adano (1944), and a nonfiction account of atomic-bomb victims,... Read more
Download the Study Pack