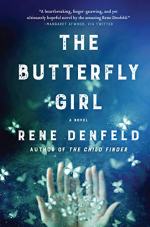 Get The Butterfly Girl from Amazon.com

Everything you need to understand or teach The Butterfly Girl by Rene Denfeld.

Rene Denfeld's novel, The Butterfly Girl, is the sequel to The Child Finder. This second installment is the continuing story of Naomi, a young woman who is a private investigator. Naomi's expertise is in finding missing children. As a child, Naomi and her younger sister, Sarah, were kidnapped. While Naomi escaped, Sarah did not. On the hunt for Sarah, Naomi meets a street girl named Celia who captures Naomi's attention and her heart. The hunt heats up when Celia also goes missing and Naomi finds that the son of an influential judge is responsible for kidnapping dozens of children spanning more than two decades. The main themes include the responsibilities of adults, the plight of the homeless, and deceptive appearances.