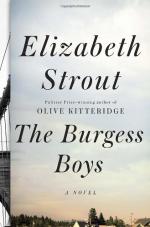 Get The Burgess Boys from Amazon.com

Everything you need to understand or teach The Burgess Boys by Elizabeth Strout.

When Jim and Bob Burgess hear that their nephew Zach Olson, in Maine, has ignited a controversy by rolling a frozen pig’s head into a mosque at Ramadan, they work together to help him, but working together does not come easily for Jim and Bob. They are both scarred by an accident that killed their father when they were children, and Jim has treated Bob roughly ever since. It is only as Zach’s prank threatens to turn into a full-blown civil rights proceeding that Jim and Bob start to be tested by events, and what comes out while they are under the strain of the case changes their understanding of themselves and their past. In the end, they find new ways to make family important, and to heal the scars that have troubled their relationship all their lives.