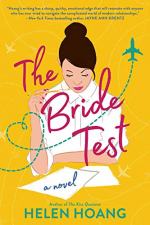 Get The Bride Test from Amazon.com

Everything you need to understand or teach The Bride Test by Helen Hoang.

In The Bride Test by Helen Hoang, Khai Diep believed that because he was unable to cry at his best friend’s funeral that it meant he had a heart of stone. He made himself believe that he was not interested in a relationship, until he met Esme Tran. Worried that Khai would never find a wife on his own, his mother Cô Nga, made a trip to Vietnam to pick out a suitable woman. Esme’s mother, meanwhile, told her that she could not pass up the opportunity to marry an American since it meant that Esme and her daughter, Jade, could become American citizens. What follows is a comedy of love that deals with themes like the difficulty in becoming an American citizen and the determination of one’s worth as well as raising awareness of autism and the characteristics of the condition.