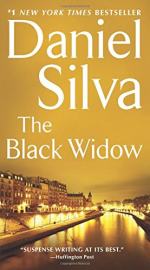 Get The Black Widow from Amazon.com

Everything you need to understand or teach The Black Widow by Daniel Silva.

In The Black Widow by Daniel Silva, the legendary assassin and operative Gabriel Allon comes back from the dead to wage war on ISIS, a Muslim extremist group threatening Jews in Paris. For the safety of himself and his family, Gabriel had faked his death and hoped to live in peace. Then, he was contacted by the French intelligence agency. A friend who had been killed in a Paris terrorist attack had willed him a Van Gogh painting. However, the only way the French would let him have it was if he agreed to find the terrorist who ordered the attack. Gabriel agreed to the proposition and went about successfully embedding an intelligence officer in the ISIS network. However, even while under surveillance by various intelligence agencies across the globe, ISIS planned and carried through with an attack on several American targets. Themes in the novel include the gray areas in the fight between good and evil, the power of religion, and the use of the media to distort opinions.