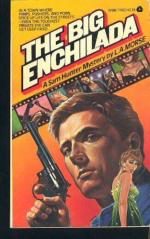 Get The Big Enchilada from Amazon.com

Everything you need to understand or teach The Big Enchilada by L. A. Morse.

The protagonist, Sam Hunter, seems an odd mixture until one understands that his antagonism to "assholes" makes his actions and philosophy entirely consistent. Morse provides Hunter with a plausible motive for his philosophy that only outside the system can one be free enough to maintain any sense of personal integrity. The combination of Hunter's experiences in Viet Nam and his memories of his father, "a straight man in a crooked town" who was murdered, add some plausibility to Hunter's strong antagonism for "slime." If Hunter seems to enjoy violence and to be callously indifferent to the fates of those whose actions have merited retribution, he always has a reason. At one point, for example, caught in a traffic jam next to a car whose quadraphonic speakers blast country-and-western music at him, Hunter asked the driver to turn down the music. When the driver refused, Hunter intimidated him by...