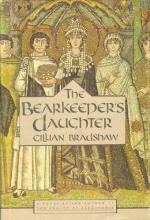 Get The Bearkeeper's Daughter from Amazon.com

Everything you need to understand or teach The Bearkeeper's Daughter by Gillian Bradshaw.

The protagonist of The Bearkeeper's Daughter is John, illegitimate son of the Byzatine Empress Theodora. Bradshaw bases his figure on the writings of the historian Procopius, whose Secret History contains much material, mostly discredited, about the emperor Justinian and his time. According to Procopius, John was ordered killed by the empress, but Bradshaw's fictional account leaves him alive and eminently successful at the end of the narrative.

Actually John is an excellent choice for the novel's central character. His ambiguous position, close to the inner circle of rule but outside of it, makes him an ideal observer and commentator. A man of many talents, John takes a job as secretary to the head chamberlain of the court, where his accounting and shorthand skills, and his command of several languages, make him an instant success. Later in the novel, he demonstrates his skilled horsemanship, and when called upon to...