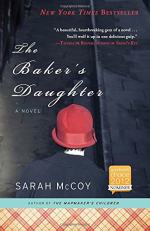 Get The Baker's Daughter from Amazon.com

Everything you need to understand or teach The Baker's Daughter by Sarah McCoy.

The Baker’s Daughter, an historic novel by Sarah McCoy, is comprised of two parallel stories. In the novel, seventeen year-old Elsie, who is living in Nazi Germany, seeks to survive the war as she hides a Jewish boy. The second story is about Reba, an editor who lives in contemporary America. Elsie's and Reba's stories intertwine.when Reba seeks to interview the now-eighty year-old Elsie for a Christmas story. The Baker's Daughter addresses themes such as truth can be difficult to determine, conscience awakens in people at different times for different reasons, and few things are morally absolute.