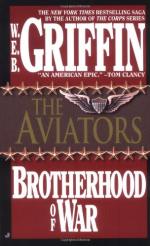 Get The Aviators from Amazon.com

Everything you need to understand or teach The Aviators by W. E. B. Griffin.

Themes in Aviators, as in the rest of the Brotherhood of War series, often cross novels and series. Perhaps Griffin's major theme is loyalty and esprit de corps — in a military or (as in the Badge of Honor series) police setting. In The Aviators, the men who fly the Army's aircraft are a tightly knit group, aware of any interference or attack, be it from a traditional enemy (in this case, the...

The The Aviators Study Pack contains: