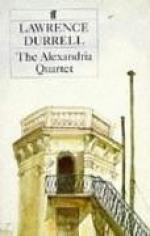 Get The Alexandria Quartet from Amazon.com

Everything you need to understand or teach The Alexandria Quartet by Lawrence Durrell.

Love, laughter, art, and the difficult struggle to break through to a fecundating tenderness and creativity may be described as Durrell's primary themes as well as his chief social concerns. Certainly the work is fundamentally a bildungsroman, and its basic thrust is the growth and education of its central character and narrator, Darley. This central quest — what Darley learns — carries him through, as Durrell writes, "the politics of love, the intrigue of desire, good and evil, virtue and caprice, love and murder," all of which move "obscurely in the dark corners" of Alexandria, move "like a great congress of eels in the slime of plot and counterplot." Slowly, with many visions and revisions, Darley learns love, and achieves maturity as man and artist.

Put more simply, the primary theme has to do with the quest to break through isolation and loneliness, to realize fullness of life...

Lawrence (George) Durrell
5,607 words, approx. 19 pages
Until 1957 Lawrence Durrell was an ordinary disaffected Englishman with a passion for writing, seemingly destined to live his life in a series of remote Mediterranean isles in the shadow of his renown... Read more