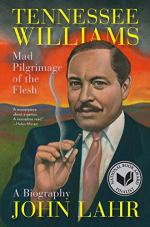 Get Tennessee Williams: Mad Pilgrimage of the Flesh from Amazon.com

Everything you need to understand or teach Tennessee Williams by John Lahr.

"Tennessee Williams: Mad Pilgrimage of the Flesh" by John Lahr began as a project to complete a two-part biography of the playwright by Lyle Leverich. His first volume, "Tom: the Unknown Tennessee Williams," was published in 1995. However, Leverich died before the second volume could be completed and all of his papers—seven shipping boxes worth—of Williams research, correspondence and interviews—devolved to Lahr as the designated succession biographer. With his considerable experience in the theater and as a drama critic, Lahr (the son of Bert Lahr, the Cowardly Lion in "The Wizard of Oz") produced a stand-alone biography that supersedes, rather than completes, the initial effort.