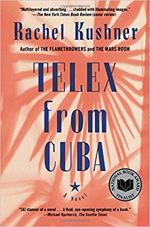 Get Telex From Cuba from Amazon.com

Everything you need to understand or teach Telex From Cuba by Rachel Kushner.

Rachel Kushner’s Telex from Cuba follows the experiences of a community of American expatriates in the fertile Oriente province in 1950s Cuba. K.C. Stites, privileged son of a United Fruit Company executive, and Everly Lederer, misfit daughter of a middle-class nickel mine employee, grow up side by side in the twin towns of Preston and Nicaro. They witness the incredible excess and subsequent downfall of their parents during the Cuban Revolution. Meanwhile, mysterious Cuban cabaret dancer Rachel K and the equally elusive former Nazi officer turned mercenary Christian de la Maziere become entangled in a love affair that forces them both to question the importance of revolution. Telex from Cuba is an expansive, lush historical novel that examines themes of sexuality, identity, adolescence, race, and revolution.