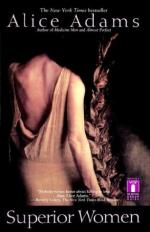 Get Superior Women from Amazon.com

Everything you need to understand or teach Superior Women by Alice Adams.

Chief among Adams's themes is that of friendship and the love that comes with it. The convoluted ties between the five coeds, first brought together by proximity and chance, are alternately cemented or fractured by Megan's compassionate warmth or by Lavinia's brittle self-centeredness. Betrayal and deceit prevail as misogynistic domineering Adam Marr nearly destroys whatever autonomy Janet develops. Lavinia seduces Henry as a way of displaying her contempt for Megan, and Janet's priest rejects the emotional demands of his relationship with Janet and her child. Some of the strongest relationships are between heterosexual woman and gay men, and the only longterm romantic relationship seems to be that between Peg and Vera.