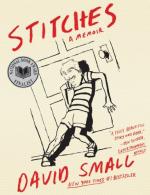 Get Stitches: A Memoir from Amazon.com

Everything you need to understand or teach Stitches by David Small.

Stitches: A Memoir, by David Small, is an illustrated narrative that tells the story of the author’s youthful struggle with a serious illness. His parents call his illness a “growth," but David later finds out that the growth is cancer. As the narrative unfolds, the revelation of the illness becomes almost secondary to the explorations undertaken by the author within the context of that illness. He develops a deeper self-awareness and self-respect as he frees his imagination and finds his voice in the face of several different experiences of imposed, accepted silence.