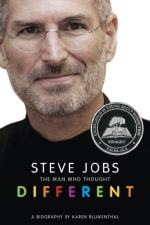 Get Steve Jobs: The Man Who Thought Different from Amazon.com

Everything you need to understand or teach Steve Jobs by Karen Blumenthal.

Steve Jobs is the original man who “thought different.” He only lasted at college one semester. He didn’t believe in wearing shoes even in the office. He was difficult to deal with or be around. He was unbearably demanding when he was focused on getting a project completed – not only completed but also in a faster time than humanly possible. His idea of okay was not “good” or “great” but “insanely great.” Steve Jobs not only inspired a generation, he reinvented life itself. His legacy will live forever.