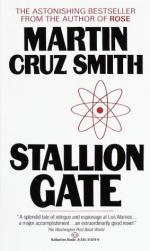 Get Stallion Gate from Amazon.com

Everything you need to understand or teach Stallion Gate by Martin Cruz Smith.

Although the narrative of Stallion Gate can be admired for its technique — for the clarity with which Smith develops a number of intersecting plot lines and the ingenuity with which he blends the actions of his fictional and historical characters — the novel's high ambitions are most evident in its treatment of its principal theme: the conflict between two visions of man's place in the world, that of the European scientific mind and that of the Native American mind, a conflict set at a crucial time, 1943 to 1945 and in a crucial place, Los Alamos and Trinity ("Stallion Gate" is a local name for the spot which J. Robert Oppenheimer renamed "Trinity" when he selected it as the site of the first test of a nuclear device.)

The first vision is that of such well-known scientists as Oppenheimer, Edward Teller, Enrico Fermi, and others...