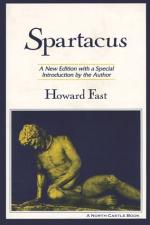 Get Spartacus from Amazon.com

Everything you need to understand or teach Spartacus by Howard Fast.

The parallel between imperialistic technological cultures, Rome and America, is apparent in Spartacus. Resisting oppression and committing oneself to action for others, even selfsacrifice, is diametrically opposed to the self-centered, solipsistic Roman attitudes. Against the Roman slave system, rebellion brings not only unity, but also equality between people, races, and even sexes. Spartacus's gladiators, dispossessed from all corners of the Empire: Thracians, Jews, Gauls, Egyptians, Spaniards, and black Ethiopians, work together equally, women alongside the men.

The promise of redemption and transformation exists not only for groups but also for individuals, illustrating the primacy of individual responsibility, moral revelation through action, and people's capacity for change. Not only the embittered, alienated gladiators but also some Romans are transformed by the example of loving sacrifice and human endurance.

The decrepit, fat, corrupt politician Gracchus, recognizing the moral superiority of Spartacus and Varinia and the bankruptcy of his own life...

Spartacus
1,618 words, approx. 6 pages
Spartacus Spartacus represents the pinnacle of the epic film trend which included spectaculars such as Cleopatra, Ben Hur, and Fall of the Roman Empire. It was acclaimed as the first truly intelligent... Read more

Howard Fast
3,923 words, approx. 14 pages
Howard Fast tirelessly worked his way from poverty to become one of the most widely read writers of the twentieth century. He was already an acclaimed writer by the mid-1940s, when he decided to forma... Read more

Spartacus
562 words, approx. 2 pages
Spartacus (died 71 BC) was a Thracian gladiator who led a slave war in Italy against the Romans. He plundered most of Italy before being defeated and killed in a pitched battle.It is not known how Spa... Read more
Download the Study Pack