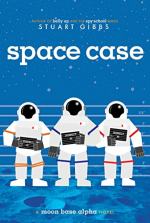 Get Space Case (Moon Base Alpha) from Amazon.com

Everything you need to understand or teach Space Case (Moon Base Alpha) by Gibbs, Stuart.

Stuart Gibbs' Space Case is the story of Dash, a 12-year-old boy who is spending three years on the moon with his parents and younger sister among a small community of scientists. When Dr. Holtz dies, most members of the base assume his enthusiasm prompted him to take an unnecessary risk, but Dash – with a little help from an alien named Zan and his new friend Kira – soon discovers that Dr. Holtz was murdered. Dash and Kira almost die proving it. Life on the moon has not been nearly as exciting as Dash had hoped, but he discovers that he can choose to make the best of his time or just mope around, wishing he could go home. The novel's main themes are the importance of friendship, the importance of communication, and the importance of making the best of a bad situation.