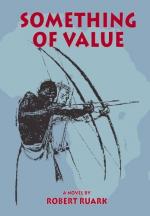 Get Something of Value from Amazon.com

Something of Value Summary
Robert Ruark

Everything you need to understand or teach Something of Value by Robert Ruark.

Something of Value Summary

The relationship between life and death in the wild as mediated by the hunter concerns Ruark. He notes that the lion shot by the hunter for sport provides a trophy for the white man, meat for the natives, and food for the hyenas and the vultures. Their leavings enrich the earth. The earth nourishes the vegetation on which the smaller animals, killed and used for bait with which to attract the lion, feed. Life and death are intertwined and interdependent.

Ruark also believes in the healing quality of the wilderness and the nobility of hunting. Cities, which are dominated by women, corrupt a man. In the wilderness, a man can purify himself and become almost godlike through suffering hardship while devoting himself to the hunt. Hunting itself serves to weed out the unfit and keep the animal population manageable, thus insuring not only the survival of the species...

The Something of Value Study Pack contains:

Something of Value Short Guide