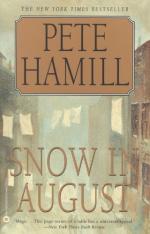 Get Snow in August from Amazon.com

Everything you need to understand or teach Snow in August by Pete Hamill.

The moral education of a young man and his initiation into the world of adult tasks are the themes of this bildungsroman.

Still on crutches from his beating, and deserted by his two friends, Sonny and Jimmy, Michael emerges from a period of introspective isolation to take dramatic action. He begins to question the street ethic that kept him from moving against the Falcons earlier, the ethic to which his mother herself ascribes...