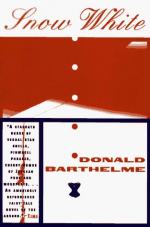 Get Snow White from Amazon.com

Everything you need to understand or teach Snow White by Donald Barthelme.

There are no characters as such in Barthelme's fiction. Instead, there are names, voices, words. The characters in Snow White appear shallow, like the characters in a fairy tale. Even their psychologies seem to be lifted from a basic psychology textbook.Snow White, for example, is an updated urban version of the Grimms' Brothers figure, with more than a dash of the Walt Disney animated version tossed in for intertextual (as opposed to psychological) depth. She is known chiefly by her long black hair, which she likes to hang out the window, by her dissatisfaction, and by her longing to be something more than the "horsewife" she has become in her menage a huit with the seven men with whom she lives and who, she claims, add up to only "two real men."

When not washing the windows, tending the vats of Chinese baby food, or manufacturing plastic...

Donald Barthelme
1,562 words, approx. 6 pages
Donald Barthelme has achieved his present eminence as one of the leading popular innovators in American fiction through the pages of the New Yorker magazine, where he began publishing in 1963. But, al... Read more

Donald Barthelme
8,515 words, approx. 29 pages
Two years after Donald Barthelme's death, his friend Robert Coover observed that his name had achieved a new currency as an adjective: the term "Barthelmesque," Coover wrote, refers not only to a styl... Read more
Download the Study Pack