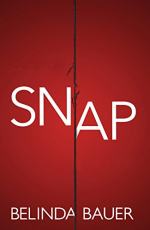 Get Snap from Amazon.com

Everything you need to understand or teach Snap by Belinda Bauer.

In the novel Snap by Belinda Bauer, John Marvel, a disgraced and disgruntled homicide detective teams up with Jack Bright, a young burglar who has once outsmarted Marvel. Together, they work to solve the three-year-old murder of Jack’s mother, Eileen. Three years after Jack's mother died, his father's grief caused him to walk away from Jack and his younger sisters. Jack was only 14-years-old when his father abandoned them, but Jack tried to be an adult and take care of his siblings. The struggle led Jack to burglarize homes. He became known as "Goldilocks." When he burglarized the home of Adam and Catherine While, he found a knife that he thought could be the weapon that killed his mother three years earlier. Jack fought with his own anger toward his mother because he believed she had put herself in the situation that led to her death. The novel explores Jack's coming of age as he realizes through his own experiences that his mother made the choices that she thought were best or her family. Other themes include appearances versus reality and the profound effects of grief.