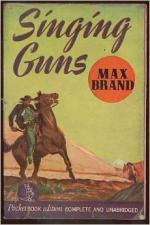 Get Singing Guns from Amazon.com

Everything you need to understand or teach Singing Guns by Max Brand.

Two of the most memorable characters in popular western fiction appear in Singing Guns — the courageous but guileless outlaw giant, Annan Rhiannon, and his canny Welsh friend, Sheriff Owen Caradac. Although masculine friendship or "bonding" is an ancient theme of the frontier story — as old as Hawkeye and Chingachgook in James Fenimore Cooper — and some versions of this theme may be found in Faust's predecessors, like Grey and Clarence Mulford, the intense comradeship that develops between an outlaw and sheriff is an original contribution of this story. The friendship between Caradac and Rhiannon springs up after an opening confrontation in the mountains where Caradac, trying to track down the legendary outlaw Rhiannon, is wounded and then nursed back to health by the bearded and half-savage Rhiannon. Rhiannon, a brave and skillful warrior who lives alone in the mountains, has a kind heart and...