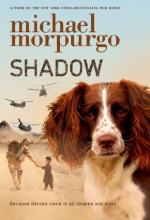 Get Shadow (Morpurgo Novel) from Amazon.com

Everything you need to understand or teach Shadow (Morpurgo Novel) by Michael Morpurgo.

In Shadow, by Michael Morpurgo, Matt and his Grandpa seek to have Aman Khan and his mother freed from the deportation facility at Yarl’s Wood. Aman and his mother are Afghans who have sought asylum in England, The story relies on Aman’s account of fleeing Afghanistan with a stray dog he named Shadow. The young adult novel deals with classic themes, such as being able to depend on family to always fighting for freedom.

You might also be interested in:
Private Peaceful
Robin of Sherwood
Waiting for Anya
War Horse
An Elephant in the Garden