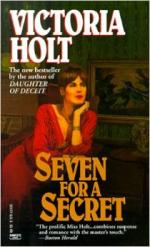 Get Seven for a Secret from Amazon.com

Everything you need to understand or teach Seven for a Secret by Eleanor Hibbert.

Seven for a Secret Summary

Seven for a Secret is about the destructive power of secrets and the healing power of honesty and love. The title refers to the children's rhyme that ends, "And seven for a secret/never to be told." The poem and the picture of seven magpies that illustrates it help suppress the truth about the novel's principal secret: the death of a child under extraordinary circumstances and the substitution of another child. If a secret is breached by an unscrupulous person, such as Gaston Marchmont who marries Tamarisk St. Aubyn, it gives him or her dangerous power. The effects of secrecy are particularly noticeable in the relationship between Frederica and Crispin. Secrecy destroys because it erects walls between people, like the bitterness of Lucy, Crispin's real mother, and like the wall that Frederica feels between herself and Crispin even after their marriage.

"There are times when I can forget...

The Seven for a Secret Study Pack contains:

Seven for a Secret Short Guide