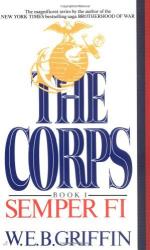 Get Semper Fi from Amazon.com

Everything you need to understand or teach Semper Fi by W. E. B. Griffin.

Themes in Semper Fi are similar to those in other Griffin novels. Loyalty is especially important, given especially the Marine Corps' tradition as an elite force. The theme of change — rapid and dramatic change — also runs through the novel, be it a readjustment in attitudes (such as the reevaluation of Japanese fighting ability after the Pearl Harbor attack), a change in weapons (Griffin spends considerable time discussing the differences between the...