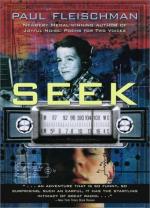 Get Seek from Amazon.com

Everything you need to understand or teach Seek by Paul Fleischman.

Seek is presented as Rob Radkovitz's senior thesis, an autobiographical essay which, according to his teacher, "should probe the themes of your life, analyzing signal events and charting the influences of family, community, and your historical era on your development." Written in an unconventional format that resembles a playscript, Rob's essay focuses primarily on his non-relationship with the father who abandoned him before he was even born. Lenny Guidry was a disk jockey, and Rob grows up listening to both local and DX (distant) radio stations in hopes of encountering his father's voice. With the support of his mother, grandparents, and, later, his new friends at high school, Rob becomes involved in shortwave radio, establishes an underground newspaper, writes fiction, and starts a "pirate" radio station. In seeking his father's voice, Rob ultimately finds his own.

Although the story of Rob's emotional journey makes for an affective plot...

Paul Fleischman
1,957 words, approx. 7 pages
Paul Fleischman is a Newbery Award-winning author of books for both children and young adult readers. He blends musical language with quirky looks at the world, viewed through the lens of human and na... Read more
Download the Study Pack