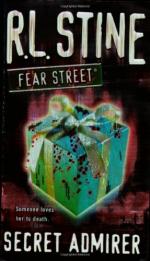 Get Secret Admirer from Amazon.com

Everything you need to understand or teach Secret Admirer by R. L. Stine.

Selena Goodrich is a popular high school senior who is the darling of the drama club. She is chosen for every play and hopes to receive a college scholarship for her acting skills. Selena begins to receive threatening notes from the Sun, a person who wants Selena to quit the school play. The Sun's threats get progressively worse until someone ends up murdered. At first, Selena doesn't want to believe she...