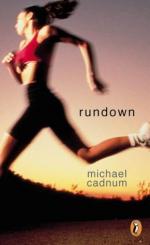 Get Rundown from Amazon.com

Everything you need to understand or teach Rundown by Michael Cadnum.

Rundown depicts the emotional breakdown of sixteen-year-old Jennifer Thayer during summer vacation. Falsely reporting an attempted rape to get attention and sympathy, Jennifer dramatically and deliberately manipulates her family and friends.

Jealous of her older sister, Cassandra, who seems perfect physically, intellectually, and socially, Jennifer wants her parents to focus on her instead of planning her sister's wedding. Initially, her faked assault is a game to Jennifer who pretends she has been attacked by a serial rapist whom the authorities have been looking for in the San Francisco Bay area. Jennifer claims that the rapist grabbed her and that she hit him and pushed him away, successfully fighting to escape from him. Although Jennifer's parents are wealthy and offer her every material need and desire without limits, she seems to be an ordinary, unfulfilled, self-absorbed, bored teenager who seeks excitement. Her accusations, however, result in unwanted probing by...

Michael Cadnum
3,955 words, approx. 14 pages
During the 1980s Michael Cadnum was a nationally recognized poet, publishing his work in prestigious literary journals. By 1990 he was also gaining wide acclaim for his suspense novels. On first consi... Read more
Download the Study Pack