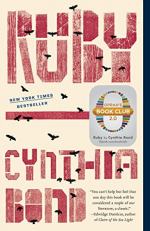 Get Ruby from Amazon.com

Everything you need to understand or teach Ruby by Cynthia Bond.

“Ruby” is an African-American historical-fantasy by Cynthia Bond. The story recounts the relationship between Ruby Bell, a woman considered to be crazy, and Ephram Jennings, a man considered weak and worthless by a town with dark secrets. The novel begins in 1974. Ephram is a lifelong resident of Liberty Township in East Texas. He has known Ruby since she was a child. He knows that she lived in New York for several...