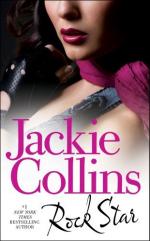 Get Rock Star from Amazon.com

Everything you need to understand or teach Rock Star by Jackie Collins.

Fame, greed, sex, drugs, and the depravity of the rock music world are the ingredients of this story about the denizens of rock-and-roll. The ambition to make it big in this world of megahits and screaming fans motivates three different characters in Rock Star: two males (one English, one African-American) and one female (a mixed blood European). How they make it to the top, how drugs and the rich and powerful pervade their existence, and how ultimately their basic "goodness" prevails, all make for a typical Collins read.

Collins gives lip-service to the prevailing concern about AIDs. For example, one of her main characters, Kris Phoenix, forswears promiscuity and settles down to more or less monogamous sex: He has one live-in girlfriend Astrid at his home in England and another one, Cybil, at his California home. Having fornicated his way through much of Europe...