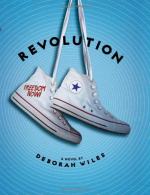 Get Revolution (The Sixties Trilogy) from Amazon.com

Everything you need to understand or teach Revolution (The Sixties Trilogy) by Deborah Wiles.

Deborah Wiles' Revolution is the story of Sunny, a 12-year-old girl growing up in Mississippi during the civil unrest of the 1960s. Sunny's life has changed dramatically. Her father has married a woman with two children, her stepbrother's grandmother has moved in, her family is expecting a new baby, and the city is flooded with volunteers helping blacks fight for their rights, including the right to vote. The reader sees these changes through Sunny's perspective, but also through the eyes of Raymond, a black teenager who wants to be part of the Civil Rights Movement, even when it is dangerous. The main themes in the novel are fear, family and the historical setting of the 1960s.

*The word "blacks" is used in place of "African American" to reflect the language used in the book itself, based on the time in history it is set.