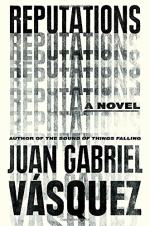 Get Reputations from Amazon.com

Everything you need to understand or teach Reputations by Juan Gabriel Vásquez.

After being praised by the Colombian government, political cartoonist Javier Mallarino believed that he had become a success. He was revered by others in the newspaper business and thought his reputation for integrity was unquestionable. Mallarino was surprised when a young woman named Samanta Leal came to visit him. Samanta had been the childhood friend of Mallarino's daughter when the girls were only seven years of age. Samanta Leal questioned an incident that had happened in Mallarino’s home nearly 28 years prior. As Mallarino reached back in his memory to recall what had happened, he realized he needed to find out the details of the event for Samanta’s sake. Reputations, a novel by Juan Gabriel Vasquez, offers insight on topics such as the power of the media, the fickleness of one’s memory, and the importance of a good reputation.